Heli’s husband is not in the mood. After many years of marriage a shoulder massage is the highest form of intimacy for him. When subtle hints, nice words and fetching clothes won’t help, Heli turns to increasingly direct action - in vain.

Then she meets the attractive Jarno, a stunning young man who, unlike her husband, prefers to play with her instead of computer games. Soon Heli and Jarno are having a heated up affair in which she will discover what she wants, and what she doesn’t want in life.

Samuli Valkama is a director and scriptwriter living in Helsinki. His first feature film LOVE AND OTHER TROUBLES was premiered in January 2012. His short films have been screened and won awards at several festivals, the most notable being the “Berlin Today” Award for ALRIGHT LOVE at the Berlin International Film Festival in 2005. NO THANK YOU is his second feature.

“After the ten years of my own marriage, the themes of a long-standing relationship were quite familiar to me, and a comedy drama seemed a personally close way to make a film.
The role of the strong female lead character and a set-up that turns the traditional gender roles upside down is the most interesting for me. In the story, we do not condemn her for it. We have a liberal attitude to a relationship and the boundaries regarded as normal.”

ANU SINISALO has acted in several drama series, films and on stage. The TV series HELPPO ELÄMÄ and LINNAN TÄHDET made her a household name in Finland. She has also appeared in feature films as VARES – THE KISS OF EVIL (2011) and MATTI: HELL IS FOR HEROES (2006).

VILLE VIRTANEN, a charismatic actor, director, author and scriptwriter, made a lasting impression already in the 80s comedy shows. Virtanen also appeared in several Finnish feature films including BLACK ICE (2007) nominated for the Golden Bear in Berlinale 2008 and the Swedish award-winning in 2010 Venice Film Festival, BEYOND (2010).

KAI VAINE appeared in the highly popular TV series in Finland. More recently, he has played the role of Niklas Järvelä in the YLE series Uusi päivä since 2011. He has also played in the feature films THE YEAR OF THE WOLF (2007) and STARS ABOVE (2012). 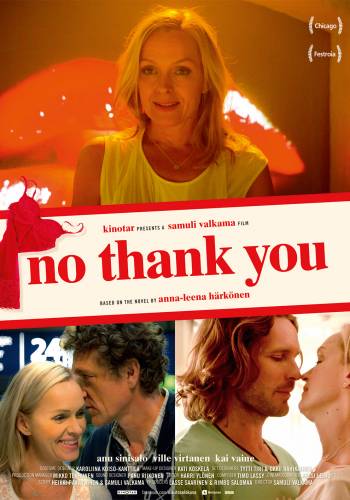