Hubert is a shy and introvert graphic designer who is not successful in approaching women. When he falls in love with Hanna, who is recovering from difficult breakup, he tries to impress her by mimicking his best friend, the perfect womanizer. It breaks the ice with Hanna, but the impersonations get out of hand, with unforeseen consequences.

Oskar Jonasson is an Icelandic film director and screenwriter. His debut feature REMOTE CONTROL (1993) was selected for Un Certain Regard at Cannes. He later directed the award-winning REYKJAVÍK ROTTERDAM (2008), which was remade into the US film CONTRABAND (2012). In 2011, Jonasson co-directed the animation THOR which was widely successful internationally and remains one of the highest budget films made in Iceland to date.

The story’s simplicity and its humour were the prime elements that fascinated me when I saw the play a few years ago. The story deals with very sensitive issues such as addiction, lack of self-control and compulsion in a unique and fresh way. It is remarkably decisive and articulate in its approach to these matters. It was a two-person play, but we have added various characters to the screenplay. The story is filled with warmth and humour. Both Kristjan and I find it important to stay faithful to the story’s finer points and we don’t want to make it too complicated, or create emotional ‘fireworks’.
I envision this film as the realistic, but colourful and bittersweet story of two young people dealing with a rather unusual problem. That said, it’s one that we have all encountered before. Who hasn’t felt shy and had a hard time approaching a person they find attractive?

SNORRI ENGILBERTSSON graduated from the Icelandic Drama School in 2012. He also studied at École Philippe Gaulier in Paris.
From his graduation on, he has been an actor at the National Theater in Iceland, often performing the main roles in the plays he appears in. He has quickly become one of the most sought after actor in Iceland.
This year, Snorri had the lead role in the film “In Front of Others”. Prior, Snorri had roles in Astropia, Summerland, Reykjvik Whale Watching Massacre.

HAFDIS HELGA HELGADOTTIR graduated from the Icelandic Drama School in 2014. Her role in the feature film “In Front of Others” is her biggest role to date and has put her on the map in Iceland. She just signed up with an agent for further roles.
Prior she appeared in the film XL and the Icelandic Dream. 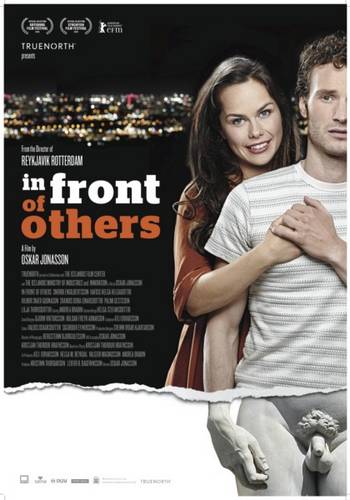