ROBERTO PÉREZ TOLEDO obtained a degree in Audiovisual Communication from Universidad Pontificia, Salamanca. There he began a prolific career writing, producing and directing more than 20 shorts that have been awarded more than 100 prizes in festivals in all five continents. “Seis puntos sobre Emma”, starring Verónica Echegui, Álex García and Fernando Tielve, was his feature film debut. Amongst other prizes, the film won the Biznaga de Plata for Best Screenplay and the Best Actress Award at the Malaga Festival; the People’s Choice Award and Best First Film at Cinespaña, Toulouse and Best First Film at Madrid Imagen.

There are few driving forces more powerful for humans than desire. Desire determines our behavior, modifies it, brutalizes it, drives it crazy. In recent years, it has been precisely sexual desire that I have found more challenging when trying to detonate a story. Is sex just sex? What could be behind a desire that appears to be only sexual? Is there not always an emotional element in the pursuit of sexual contact? From these questions comes the birth of “Like Foam”, a comedy of emotions in which sex seems like the main desire that drives the characters but we’ll soon realize that they are looking for something that actually has little or nothing to do with the use of their genitals.

SARA SÁLAMO is known for her parts in several of the most popular TV series of Spain. She has acted in several feature films including "Three-60" by Alex Ezkurdia, "The Glorious Seven" by H. Holzenleiter and "Wild Oats" by Andy Tennant.

DIEGO MARTÍNEZ is a Spanish actor known for “El clavo de oro” and "Despedida de soltero". He has worked in renowned plays and TV series such as "Amor es para siempre” and soon in the new series "Rabia".

NACHO SAN JOSE has acted in several films such as “Legionario” by Eduardo H Garza, “People you may know” by JC Falcon and “Grimsey” by Richard Garcia and Raul Portero. He is also known for popular TV shows like “El ministerio del tiempo” and “La que se avecina”. 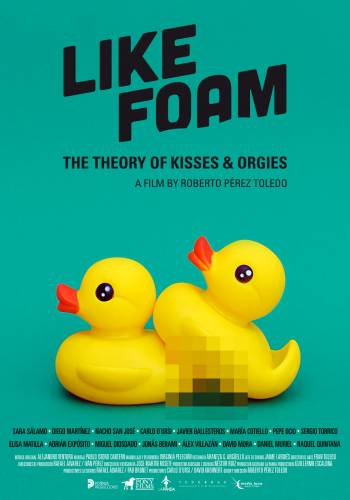