Sweden, 1985: the TV-show Rekord-Magazinet announces Köping to be the most boring city in the country. While the long-time residents of the town ignore the news, a middle-aged newcomer called Hasse P. decides to hit back at the "Stockholm snobs" by baking the world’s longest layer cake, bringing the town together in the process.

Filip Hammar and Fredrik Wikingsson are Sweden’s most award-winning TV personalities, having won a total of nine Swedish Emmy awards. Their feature documentary Nice People, was a box office smash in Sweden and received a lot of international recognition. The Cake General is their first feature film, which has been a critical and commercial success in their native Sweden.

Mikael Persbrandt is one of the most well-known Swedish actors working nowadays, known in Scandinavia for his role as Gunnvald Larsson in the series Beck, and throughout the world for his participation in Peter Jackson’s The Hobbit trilogy, as Beorn, as well as Susanne Bier’s In a Better World and Kristian Levring’s The Salvation.

After smaller roles in TV Series and short films in her native Sweden and in Germany, Agnes Lindström Bolmgren makes her feature film debut in The Cake General.

Helena Bergström has a career spanning over three decades, ranging from Film and TV to Theatre and Music. She had her acting breakthrough with The Women on The Roof, where she acted alongside Stellan Skarsgård, and was awarded the Guldbagge for Best Actress for her roles in The Ferris Wheel and The Last Dance. 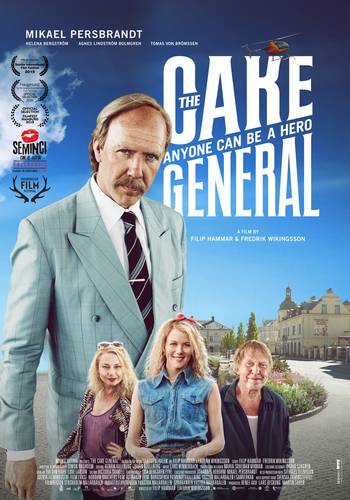