Perla is a mother with three children: Carolina, Estefania and Salvador. She is obsessed with turning one of her daughters a beauty queen and fulfill her own childhood dream. But her desire and obsession encourage the competition among her daughters since childhood. While Salvador, the only son, is always looking for a place in the affections of his mother, who is always focused on her “two princesses”. Years later the unlimited efforts to achieve Perla’s dream will be transformed into a nightmare for both of her daughters.

Carlos Caridad Montero is a Venezuelan filmmaker graduated in the EICTV, Cuba. His short films have been screened in festivals such as Cannes, Clermont-Ferrand, Mannheim and São Paulo. 3 BEAUTIES is his first feature film. Currently, he’s in post production of BEYOND SILICONE VALLEY, a documentary winner of Morelia Lab 2010 (Award for the best Latin American project) and winner of the ARTE award in Doc Buenos Aires 2011.

“The successful participation of Venezuela in beauty contests, has earned this small country the reputation as "the land of beautiful women" and has spread the idea that there is no more beautiful women than Venezuelans. The media have ensured that this vision is rooted in the psyche of Venezuelans. An unsettling dark comedy 3 Beauties doesn’t seek to be a pamphlet against this obsession but to provoke discussion.”

Diana Peñalver is a Venezuelan actress and theater director. She studied Performing Arts at the Central University of Venezuela and participated in specialized training seminars in Odín Teatret, Denmark. Since 1992 she has been directing the prolific group “Teatro la Bacante”.

Fabiola Arace is a actress and singer. She began studying acting at 10 years old and has participated in several musical and theatrical works. In 2015 she will make her debut in television as part of the cast of a TV drama. 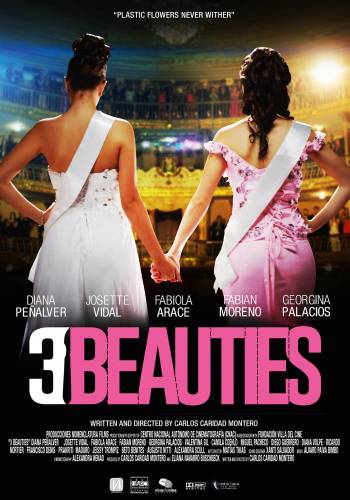