U2’s Bono wants to cover a song of an almost forgotten Mexican Rockband that has been dissolved for more than 30 years. The band reunites seeking for fame and fortune, but old and new rivalries between Eddie, the vocalist, and Santos, the guitarist, break out, confounding the illusion that old wounds have been healed. When Bono cancels the deal, Eddie convinces the other band members to stay together and play once more, like in the old times. Eddie Reynolds and The Iron Angels is a comedy about friendship, debauchery, second chances and about dreams that can come true… even 30 years later!

“I wanted to make this film because when I first read the screenplay, it brought memories of my years working as a journalist in the early 1990’s. Those days were the end of an era: the great movement of the ‘Spanish Rock’ began to fade after giving birth to great Mexican bands like ‘Caifanes’, ‘Café Tacuba’ or ‘Santa Sabina’, while many others arrived in the scene singing one hit wonders and then died without even recording a second album. I wanted to tell the story of one of these bands that I met and interviewed, bands formed by childish creatures with dreams of becoming the next Mick Jagger or the next John Lennon, and only disappear into oblivion. The question for me was: Where do these talented musicians that never got into stardom could be 25 years later? ‘Eddie Reynolds’ provided the answer along with a loud whisper: ‘Stay forever young’”.

DAMIÁN ALCÀZAR was born in Jiquilpan, Michoacan, Mexico. He is an actor, known for “El Infierno y La ley de Herodes” by Luis Estrada and his role as Lord Sopespian in “The Chronicles of Narnia: Prince Caspian”.

ALVARO GUERRERO was born in Mexico City. He is an actor, known for “Amores perros” by Alejandro González Iñárritu and “Conejo en la luna” by Jorge Ramírez Suárez.

JORGE ZÀRATE is an actor and cinematographer known for “El Infierno” by Luis Estrada and “El crimen del padre Amaro” by Carlos Carrera. 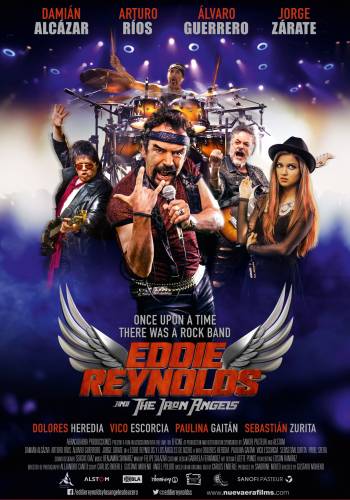