To get married is easy, but will things still go smoothly when it involves a homophobic Arab father, a pseudo-orthodox Jewish mother and an unexpected pregnancy? David and Khaled need to set a lot of things straight before they can say the vows and live happily ever after._x000D_

Hanno Olderdissen was born in 1976. After being a show jumper, working as a male nurse at a mental hospital and studying sociology he finally makes it into the film industry. 2000 to 2004 he gets extensive work experience in cinema and commercials as dolly grip, location manager and 1.AD. In addition he starts to direct his own short movies. 2004 to 2007 he studies film directing at the international filmschool cologne. His thesis film, is the award winning short film "Robin". 2008 he founds the directing team „gentlemen’s agreement“ together with fellow director Markus Sehr. 2008 to 2013 they direct commercials and virals. Besides Hanno develops scripts for his feature debut and works as an author and director for corporate films. Since 2014 Hanno is working solo as a freelance director for feature films and commercials. „Family Commitments“ is his first feature film.

"Family commitments" is a turbulent "multiculti romantic comedy", which deals with the clash of generations, religions and cultures in a playful-humorous and at the same time serious way.
Almost everyone - regardless of religions, cultures, origins, home, disability, age or sexual orientation – can find himself in this story. If there is something universal in the world that's equally touching and committing, it’s the family! Everyone is aiming for recognition, respect, tolerance and love, especially within the own family. "Family Commitments" is a story that is locally situated in northern Germany, but comes along with much global relevance, everyone worldwide can identify with. It deals with socio-political topics in an authentic, playful and witty way, that already has entertained, inspired and delighted many different audiences.

Max von Pufendorf - DAVID
Max von Pufendorf (*1976 in Hilden) completed his studies in acting at the Academy of Dramatic Arts "Ernst Busch" Berlin. From 1999 to 2001 he had his his first engagement at the Residenz Theater Munich, follwed by Maxim Gorki Theater Berlin At the Deutsches Theater Berlin he was seen in plays like Shakespeare, A Midsummer Night's Dream etc. His film debut in 1999 was the neo-noir thriller “The Unscarred (Everybody dies)”, alongside Heino Ferch. In 2000, he was next to Dagmar Manzel, Shia LaBeouf and Tom Schilling for staff of the coming-of-age film drama CRAZY.

Omar El-Saeidi - KHALED
Omar El - Saeidi (*1980 in Gießen) is a German actor of Arab origin. After training as a business administration graduate of the real estate industry Omar El - Saeidi studied acting training at the Rostock University of Music and Theatre. His final thesis was on "The German actor with immigrant background". Since 2000, El - Saeidi was seen regularly in theater and television roles. 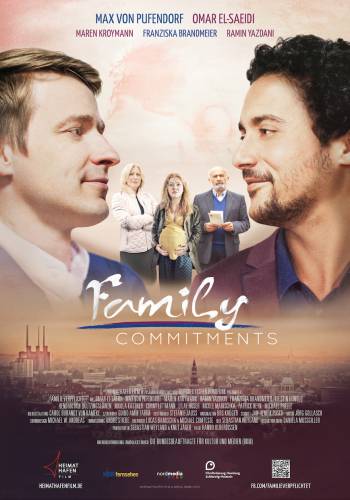