In the Brandenburg province, Markus is torn between his love for his grandmothers in need of care and his longing for urban self- determination in Berlin. Most of the time, he is left alone with his worries. But when Vietnamese technician Duc enters his life, things become more complicated, as Markus has to decide if he should stay or go…

Johannes Maria Schmit works as a freelance director for German and Swedish theatres and is part of the performance duo White on White. The naturalistic drama Neubau is his feature film debut.

This film is the attempt of translation without generalization, seeking to visualize the world of a very special character without involving a conflicting norm as a means of comparison. We tried to work around the genre of a coming of age drama, showing peoplefrom the countryside in concrete relations and in their everyday life. Inspired by the timelessness of the landscape within the film, turning points are not dramatized in an edgy way but carried gently from hill to hill.

Tucké Royale
Tucké Royale is an actor, musician, director and writer. He lives in Berlin and is working mostly for the stage and in experimental arts. Neubau is his feature debut as a writer and actor.

Jalda Rebling
Jalda Rebling is an actress who is known for her work on East German TV in the 1980s. With her role in Neubau, she is returning to acting after a break of almost 35 years. 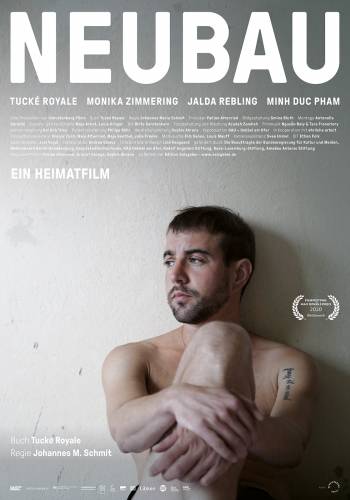