The clean beach brings them together and reopens the prospective of hope to them all. But is such an escape at all possible?

Valery Yordanov, born 1974 in Sofia, Bulgaria, graduated from The National Academy of Theatre and Film Arts “Krystyo Sarafov” in Sofia, in the class of Professor Stefan Danailov, and Actor’s art at Bulgarian National Theatre “Ivan Vazov”.

Ivan Vladimirov was born 1976 in Pernik, Bulgaria and attended the National High School for Ancient Languages and Cultures and graduated from the National Academy of Theatre and Film Arts “Krystyo Sarafov” in Sofia, majoring in Directing for Film and Television. He gained experience by working as an Assistant Director for seven feature films.

Sneakers is a film about freedom. Freedom to live wherever and however you want, freedom to communicate and the freedom any youngster needs in order to become a mature personality.
As a young directors, and this is our first film, we are interested in our generation’s predicaments – inability to tackle the more and more complicated issues of our existence, the ever growing aggression in and around us. Our ambition is, through this film, to address the issue of the more and more difficult choice we have to face. Should we give up and go on living in a world we don’t want or should we get the hell out? But where to? Is there such a place? Or, perhaps the only possible escape route leads into our own selves.

We believe that this is a new and apparently lasting trend establishing itself in our society. Following the great emigration exodus abroad, another great wave is now underway – escape from reality. We are hoping the film would be construed as a confession of our generation. 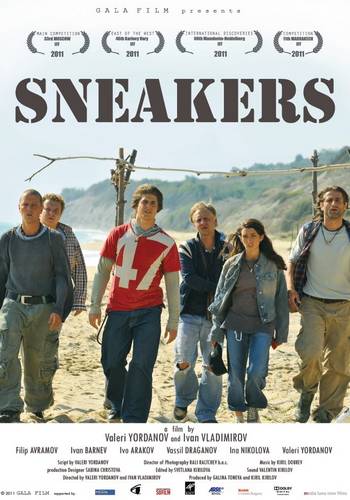