East Timor’s historic first feature film, A Guerra da Beatriz, is the haunting, passionate story of one woman’s conviction to remain true to the man she loves and the country for which she fought. It is a bold reworking of the 16th century French ‘Martin Guerre’ story. In this adaptation the original story is transposed to Portuguese Timor during the Indonesian occupation of the small nation. Sixteen years after Beatriz’s husband disappears during a brutal massacre by occupying Indonesian forces she is troubled by his mysterious return: is he the young man she’d lost or is he an impostor?

Best Film at International Film Festival of India!
Gold Award for Features - Cinema and Judges' Choice Award for 2013 for director of photography, Valeriu Campan in Australia

Bety Reis
Bety Reis has written and directed many theatre productions in Timor-Leste since 1999, when the country became independent. She is the country’s leading film director having made four shorts and a feature.

Luigi Acquisto
Luigi Acquisto has built a reputation for producing original, compelling and popular films, which explore social and political themes. He has been based in East Timor since 2007.

Since independence East Timor has rebuilt from ground zero. Beatriz’s War is the start of a film culture, something as rare as the birth of a new nation, Luigi Acquisto.

Imagine what it is like to live in a country that has never heard its language or seen the faces of its people on a screen. This first film, is full of pain but also courage, love, and the compulsion to tell our story, Bety Reis.

Beatriz
IRIM TOLENTINO
Irim Tolentino is one of East Timor’s most talented and experienced actors. She co-founded the theatre group Bibi Bulak (Mad Goat) in 2001 and has appeared in many local East Timorese television programs and theatre productions. She is an author having published her first award winning short story in 2009. She is a co-writer of A Guerra da Beatriz.

Teresa
AUGUSTA SOARES
A Guerra da Beatriz is Augusta Soare’s first film. Her passion for performing grew out of her involvement in cultural youth groups in East Timor. Augusta has recently been awarded a scholarship to study English in Australia. 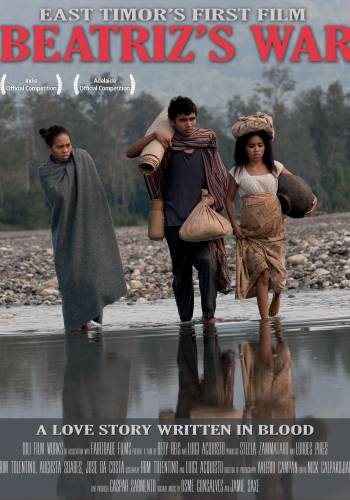