Ana is a young, well-educated Spanish woman from a traditional middle-class family. She is about to finish her PhD in Law and get married but she doesn‘t feel fulfilled. One day, a double appears and takes her place. Realizing for the first time that she is totally free, Ana decides to explore her new anonymity and freedom, testing her own limits and searching for the meaning of life between a boarding house and cabaret nights in Madrid.

Andrea Jaurrieta is a graduate from ESCAC and Complutense University of Madrid as well as a graduate in drama from William Layton’s Lab. Ana by Day is her first feature film. Previously she has directed several short films and video-installations. She combines her personal work with her job as a History of Cinema teacher and as Executive Development Assistant for Icónica Productions.

In Ana by Day time is stopped in Madrid’s under-world in which Ana will get lost trying to find herself. She will try to run away from this sense of emptiness that some formal women of my generation have. A desire of escaping that also exists as a repressed wish for all the characters of the film. Are we living the lives that we want? Can we escape from ourselves? This is the point of convergence of all my previous films.

INGRID GARCÍA-JONSSON is one of the most outstanding new actresses in Spain. She became known for Beautiful Youth for which she was nominated and won several awards internationally. Since then she has been working in both major and independent productions, and successful TV-shows.

MONA MARTÍNEZ grew up in national theatre productions, gaining several nominations at the national awards as Best Actress. She has worked in many TV series and movies like Hispania, The Duchess, Hospital Central and the acclaimed Locked Up.

ALVARO OGALLA started his career as an actor in The Apostate, in which he also worked as a screenwriter. Ana by Day will be his second film as a leading actor. Currently he is developing his next film as a script writer. This project has been granted by Ibermedia. 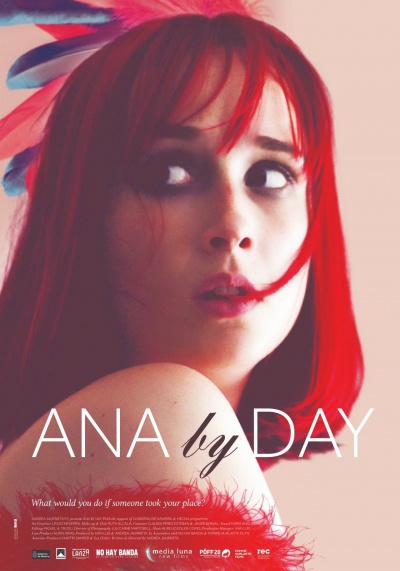