Little is known about the catastrophe Anna and Hannah have escaped. On a desolate island they find an abandoned house where Anna takes care of Hannah. Hannah’s fragile condition reminds the two lovers that their time together is coming to an end.

From Urszula Antoniak whose films have premiered in Cannes and Locarno, comes a tense new mystery drama - an equally horrifying and tender exercise in exploring the very limits of humanity.

Urszula Antoniak is a Polish/Dutch scriptwriter and film director. Her debut film Nothing Personal won six awards at the 2009 Locarno FF, including Best First Feature and Best Actress (for Lotte Verbeek). Her second film, Code Blue, was selected at Cannes Directors' Fortnight. Her filmography includes the experimental film Nude Area and Beyond Words which premiered at Toronto FF and was selected for competition of San Sebastian FF. Splendid Isolation is her latest feature film.

Time freezes when every moment spent together can be the last one. Saying goodbye is a process driven by hope and denial, cut short by the arrival of Death. The one who leaves and the one who stays behind: both feel guilty of abandoning the other.

Splendid Isolation was born out of the urge to respond to the moment. During the pandemic death moved closer to me, someone already living in the shadow of my husband's death for some time, or actually – in the fear of death. The pandemic confronted me with this. For me, the symbiosis of two people where one suffers and the other takes care of him or her is always the state of an island inhabited by the two. Therefore I have chosen an island as the setting for my allegorical story about leaving your beloved to Death.
In Splendid Isolation I have adopted a lyrical tone to approach the subject of death, the tone we cherish in the music of Vivaldi and Purcell, one that allows us to view the subject of death from an intimate perspective, stand still for a moment, ponder our fragility and let the tears flow.

Finding freedom in incorporating the ever-changing weather, the light, the sea - all of it into the creative process. For me Splendid Isolation was a return to the essence of filmmaking, which I see very much as weaving or piecing together a poem.

Anneke Sluiters is a film and theater actress and writer. She is seen on stage in many different shows, such as Giants by Artemis, Alice, Leo and Lena by NT Jong, Beauty and the Beast. On screen, Anneke performed next to Gijs Naber in Tulipani: Love, Honour and a Bike by the Academy Award winning director Mike van Diem.

Khadija El Kharraz Alami graduated from HKU Theater School. She has received amazing reviews and prizes for her performances, especially for NU BEN IK MEDEA. She performed for the National Theater The Hague, with Theatre National de Strasbourg and the Thalia theater.

Abke Haring is a writer, director and actor of theater and film. Abke took on leading parts in productions as Jeanne d’Arc in ‘Bloed en Rozen’ and Hamlet in ‘Hamlet vs Hamlet’ , which won her the Theo d'Or for the best female lead role. 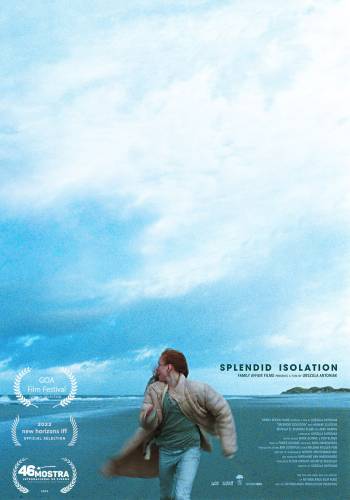