Neneta lives without responsibilities or plans in a motor home on the coast of Spain. When her partner, 'Wolf', disappears without explanation she decides to go back to her hometown in Galicia. All are difficulties, coming back to her mother, finding a job. Until she gets an offer to be a construction worker. With courage and sense of humor she overcomes the hard work and being a woman in a man world. She grows stronger and independent as her group is beginning to be known as 'The Aces' for their ability to be the fastest workers around. She starts dating an old friend, get along with her mother and stabilize her life. But 'Wolf' comes back and she must confront the decision to run with him again or stay and build a life for her and her child.

Alfonso Zarauza was born in Santiago de Compostela. As a teenager, he gaves his first steps in literature, music and theatre. And never stopped.
His debut was as a writer and director of the short film "Hay que joderse ". Alfonso Zarausa made several shorts, while completing his film studies at HIA in La Coruna.
He organized several theater workshops. As a director and a screenwriter, he’s made 4 films, of which he’s directed three.

“I wanted to make a film about the economic crisis far from the topics of good and bad, a view from inside the “Brick boom”. It is clear that in this crisis have been winners and losers, and I was much more interested on talking about the latter, but with a self-critic and little complacent vision. I wanted to make a deep reflection, without being overdramatic, on how they managed to fool so many millions of Spaniards so as to understand how we have got to where we are now. I found it interesting to do it from a female perspective, so I decided to put the character of Lola Dueñas in a man's world and get a view from inside the world of building in a particular way.
The love triangle between the characters of Neneta Lobo and Furon, symbolizes the dichotomy between passion and freedom represented by Lobo and his free life in Cabo de Gata, and the bourgeois security symbolized by Furon and peaceful and quiet life in a town in the north of Galicia. Neneta escapes from Lobo and this heavenly place in Soutnern Spain, to end as a prisoner in another place in the north because of the economic crisis (as it has happened to millions of Spaniards). This is the essence of what I wanted to portray in this film.”

LUIS TOSAR
Born in Lugo, Luis Tosar is one of the leading film actors today. As a TV-series actor, he won important awards. He won several Goyas and Festivals Best Actor Awards. Apart from the cinema, Luis Tosar sings in "Di Elas", a rock band and is outstanding for his social commitment and his defense of Galician language.

LOLA DUEÑAS
Lola Dueñas was born in Barcelona. She studied acting at the Institut del Teatre de Barcelona. She acted in numerous short films and occasional films. She worked with great directors and cted in so formidable films as "Hable con ella" or "Volver" by Pedro Almodovar (she won the Best Actress award at the Cannes Film Festival). Alejandro Amenábar gave her the title role in "Mar Adentro", what brought her another best actress award. With her performance in "Yo también" of Álvaro Pastor and Antonio Nahas she won the silver shell at the San Sebastian Fest. and the Goya Award for Best Actress. 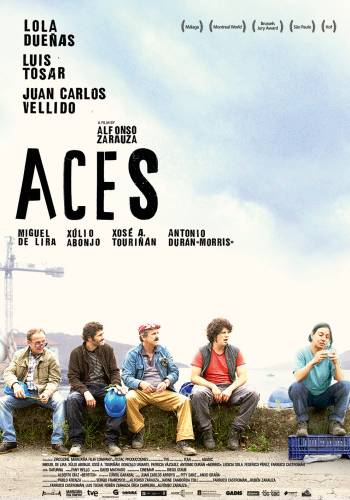