Sara is about to get married. Friends and relatives gather to throw her one last big party, and over the course of that unforgettable day, Sara will find herself facing the truth about her relationship. While every one around her seems to be harboring unspeakable secrets and impossible desires, a string of disasters turns friends into fiends, lovers into enemies and a joyful celebration into a whirlwind of chaos.
And at the end of the night, Sara may be about to lose her future ... or finally win back her freedom.

Antonio Álamo (Córdoba, 1964) is a writer, playwright and director. He has published five novels and two story books, which have been translated into several languages. Fifty theatrical premieres mark his career, and his plays have been recognized with more than a dozen awards, such as the Tirso de Molina or the Born Award. In addition, he is the author of many adaptations and versions of classical and contemporary authors. He has written television series and directed video clips and a short film, Naturaleza, presented at the Seville European Film Festival.

My Grand Farewell is a women's ensemble comedy. The theme of the film is, of course, love, but we always take the feminine point of view and always focus on the climax: the breakup, that moment when everything is at a point of breaking and blowing up. This is the case of Sara, the main role and the thread of the story -she apparently has a placid existence until the day her boyfriend sues for her hand and then she begins to get entangled in all the preparations for the wedding, but is it what she really wants to do? This is the case of her would-be sister-in-law, Milagri, who keeps an unspeakable secret for which she fears to lose her husband. And finally, this is the case of Puri, the slum girl willing to do anything to get her rich and attractive boyfriend back. The source from which the drama appears is the same from where the comedy springs. My Grand Farewell is a movie for all audiences.

Eloína Marcos
Spanish actress, born in Seville. Although she began her professional career in theater, she is best known for her roles in the Antena 3 series Bandolera, where she played Pilar Candela (2012-2013); El príncipe, in which she plays Pilar, one of the friends of the protagonist and in Allí abajo, joining in the second season of the series playing the role of Elena. 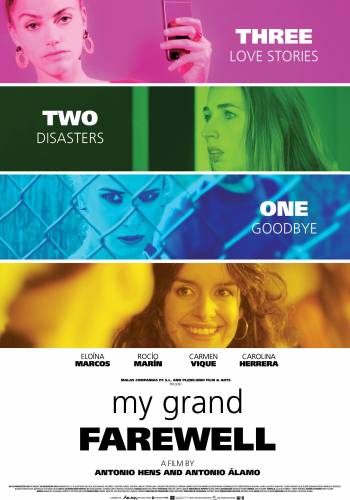