Minthe, a young woman with a tormented past, finds herself the victim in a conspiracy of criminals. She makes a pact with a mysterious cave creature and now has to carry out a dangerous task.

In search of her true identity, she has to face her demons for a chance to start her life all over again.

Misha L. Kreuz has worked as an editor, assistant director and production manager for film and TV. After a variety of commercials, he wrote and directed his first independent feature "Greenhorn" which started to gain traction and international recognition in 2003 and was shown at film festivals worldwide. "In the Light of the Night", Kreuz’ follow-up to this venture, was completed this year in cooperation with Cologne production company Uhlandfilm.

The film arose from the observation that the bourgeois world produces facts that lead to insoluble contradictions and often end up in crime and destruction. In the past, the manifestation of patriarchy in civil society has led to increasing challenges for the feminine part of society. "In the Light of the Night" not only reveals the abyss  behind  the surface, but  the  cinematically  designed  surface  forms  the abyss for everything that happens in the film.

Ralf Drexler is a German actor who worked for a number of feature films and TV series on German TV, such as Cologne, P.D. and crime hit show Tatort.

David Rott is an actor who is known for his numerous work in German TV shows, among them Tatort, Bad Cop, Nord Nord Mord and the Donna Leon adaptations. 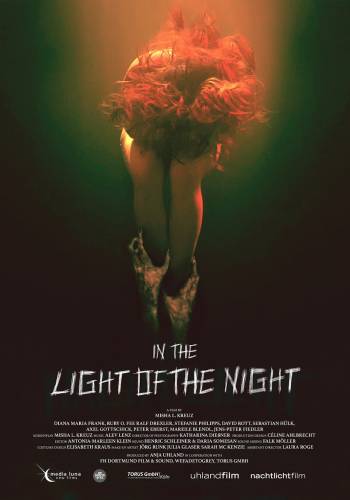