Mateo and his best friend David are architects and prepare the most important presentation of their lives: they will have to convince a foreign investor to support their project. Problem: Mateo suffers from extreme shyness and panic attacks. So, to calm down, he takes a sip of a drink, unwillingly creating his nemesis: Malacopa, who crashes the presentation and persuades the investors to close the deal. But then he also tries to take over Mateo’s personal life, causing a chain of misunderstandings.

In this project, by way of Dr. Jekyll and Mr. Hyde, a character lacking self-confidence believes that the answer to his problems is alcohol. With it, he is able to transform himself and overcome his shyness. He will soon realize that short paths to success are usually longer and painful. By using comedy, we intend to convey this message: for us, comedy is not against reality; it’s based upon it.

LUIS ARRIETA is a Mexican actor, producer and screenwriter, known for his roles in A la Mala, Happy Times and Grandma’s Birthday, as well as for writing and producing The Misfits, which won the Audience Award at the Guadalajara International Film Festival.

LUIS ERNESTO FRANCO is a renowned actor in his home country Mexico, appearing in many TV productions in recurring roles, such as Bajo el mismo Cielo, Señora Acero and Camelia La Texana. Since 2008, he has also become a presence in several feature film productions.

DANNA GARCÍA is a Colombian actress who started acting in her teenage years. She had leading and recurring roles in TV series like Bella Calamidades, Qué bonito Amor and Alguien Te Mira. Boozer is her second feature, after debuting in 2012 with the Mexican production El Cielo en tu Mirada. 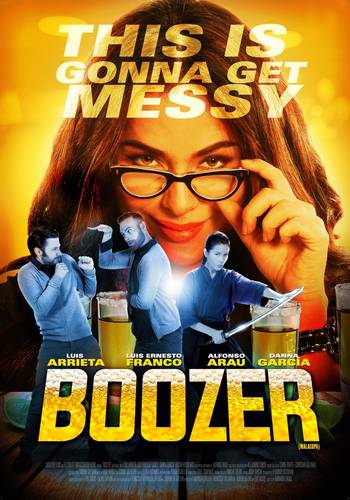