A projectionist confined to live his existence passionately in love with a woman he knows only through projected film reels. One night the reels get burned and he embarks on a trip searching for the real identity of his mysterious beloved.

José María Cabral is a Dominican director, screenwriter and producer. His first feature film, Jaque Mate (2011) was selected as the Dominican entry for the Best Foreign Language Oscar at the 85th Academy Awards. His previous film, Woodpeckers, had its world premiere at the Sundance Film Festival in 2017.

Milan Kundera said that good characters were born from a stomach ache, and that is exactly how Eliseo was created. The difference between me and the character is that one projects films and the other makes them. Creating films make you conscious of your inner motives, many of them as dark as Eliseo’s universe. And this is where The Projectionist starts off, from an important and recurrent obsession that motivates the character, the movie and the director himself.

Félix Germán
Is a veteran Dominican actor and director whose career in Film and Theatre spans over five decades. In addition to his many roles in Dominican films, he has also participated in international projects such as Sydney Pollack‘s Havana and Andy Garcia‘s The Lost City.

Cindy Galán
Is a young actress with a rising profile in the Dominican theatre scene, after roles in Desnudos, Perfectus Quorum, and Hamlet, making now her debut in feature films with The Projectionist. 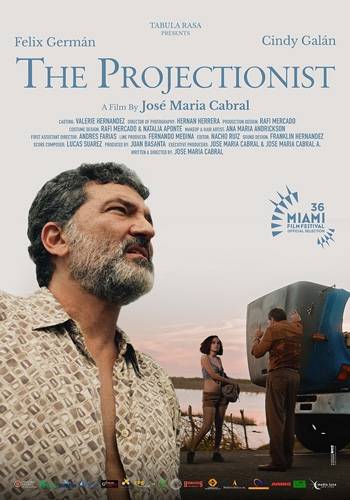