The famous Sommelier Charlie Arturaola fell from grace after a momentary loss of his taste during the shooting of a movie. The image of “a Sommelier without palate” destroyed his career. After a few years, Charlie becomes a taxi driver, but he never gave up of dreaming to get his reward back. When Charlie accidently gets to know the newcomer Italian sommelier, he will come with a crazy plan to try to get back into the wine world!

NICOLÁS CARRERAS graduated in Film Direction at the Universidad del Cine (Argetina), where he is currently teaching. He works as a director, photographer and editor. Many of his films received international awards. At CACTUS CINE, his production company, he produces for cinema and TV. In 2010, he directed the documentary THE WAYS OF WINE, winner of the FIPRESCI Award at Mar del Plata Festival, and it was screened at Berlinale and San Sebastian at Culinary Section. THE DUEL OF WINE is his first feature.

CHARLIE ARTURAOLA is a Chef, Sommelier, wine educator, appraiser and lately, an actor. He has traveled the world working in top cruise lines, luxury hotels and high end restaurants. He has appeared as guest speaker in the top Wine Trade Expos and festivals in the Americas and Europe.
Recently, Arturaola starred in a docu-drama, THE WAYS OF WINE, about his life at the vineyards. In 2015, Arturaola will win a recognition to his wine career the prestigious International Wine & Spirit Award, naming him “Wine Communicator of the Year” at the oldest tasting institution IWSC in London. 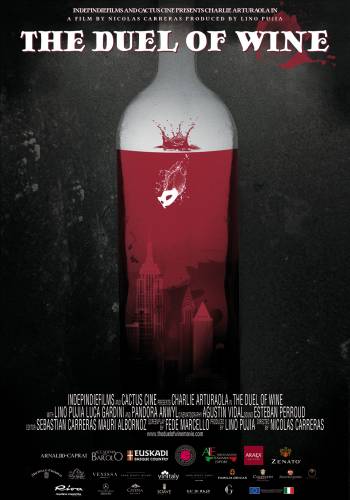