At 40-something, Jaime is an ordinary guy married to Eva, who with her lack of intellectual resources thinks he's a prophet. They decide to celebrate their 15th wedding anniversary at a swingers’ party in an attempt to revive their marriage. But what promised to be a pleasant evening ends with Jaime coming up with a bizarre plan to escape the party

The swap is a comedy, a movie where we talk about what we want to be and what we really are.
The film shows the journey of an individual who starts up being God and ends up being nobody. But in the discovery of the "nobody", he discovers himself.
It is a film with which we pretend to amuse ourselves based on a solid argument, dialogues, situations and interpretations of the cast.

PEPÓN NIETO debuted as an actor in the TV series Farmacia de Guardia and his film Días contados. Since then he has achieved numerous successes and awards. He highlights in films like Perdona bonita, pero Lucas me quería a mí, Asuntos internos and TV series like Periodistas, Paco’s Men.

HUGO SILVA’s role as "Lucas" in the hit series Paco’s Men was the springboard for his first movie as main actor The Sandman. After films like Sex, Party and Lies, The Body, Witching and Bitching or Shrew’s Nest have led him to be one of the most fashionable actors in Spain at the time.

ROSSY DE PALMA is not only an “Almodóvar girl”. She accumulates more than forty apparitions between films, and TV series. Along her career, she has been nominated to several national and international awards for her roles in Kika, The Flower of My Secret, Ready to Wear, Hors Jeu and Julieta. 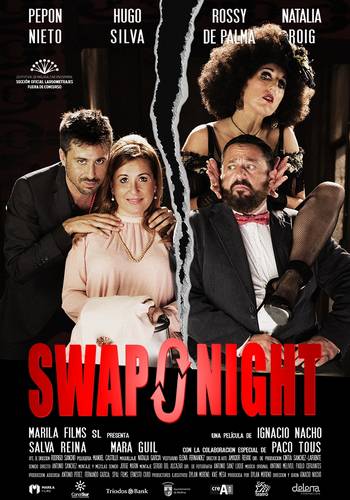