In 1940‘s Mexico, widowed Doña Josefina and her five spinster daughters await a man, coming to marry the youngest of them, Ninfa. The local townspeople, excited at the prospect of one of “Virgin Josefitas” finally marrying, prepare massive celebrations. When the mysterious suitor finally arrives, however, Doña Josefina refuses to allow the wedding to take place and Conrado Sierra is forced to leave town. Ninfa must decide whether she will remain in the dusty confines of Torres Mochas under her mother’s strict regime or if she will find the courage to live her dreams of love and freedom.

RENE PEREYRA studied at the Lee Strasberg Theatre Institute after obtaining a scholarship from Lee Strasberg himself. He directed more than twenty plays, representing Mexico in various international festivals.
In 1993, he was awarded with a Rockefeller Scholarship and invited to perform his most successful plays in New York. Since 1998, Pereyra is teaching Method acting at the UCLA in California. „The Arrival of Conrado Sierra“ is his first feature film.

“The Arrival of Conrado Sierra” is part of a trilogy set in the mythical town of Torres Mochas and dedicated to rescuing the little-known but much-maligned desert culture of Northern Mexico. It is also an ode to all women and the rights and values that have been denied to them by the prejudiced and sexist society throughout the troubled history of Mexico.

MAITE PERRONI is a Mexican actress, famous for her roles in various telenovelas, such as „Rebelde“. In 2014, she was proclaimed the new Queen of Mexican telenovela by the magazine „People en Español“. In „The Arrival of Conrado Sierra“, she plays her first role in a feature film.

SUSANA DOSAMANTES made her debut in 1968 with the film “Remolino de pasiones”. She has a big career behind her, acting in more than 65 features, 19 telenovelas and 10 plays and won several awards including a Diosa de Plata for her role in “Recuerdos del Porvenir”. 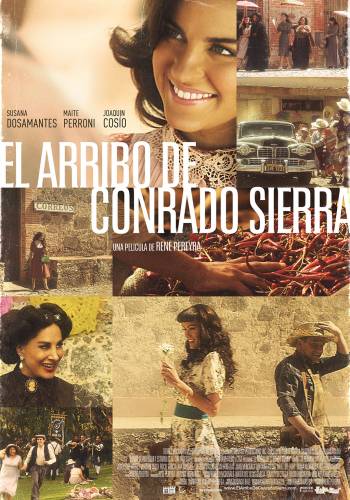