Mike has locked himself in for weeks. He is not sick. He has consciously decided not to take part in the life outside anymore. And his parents or sister cannot do anything about it. All they can do is stand in front of the locked door and prompt, plead, ask, lose it, despair, accuse, ignore, and hope. In the process, the door increasingly turns into a mirror of their own stories.

ISA PRAHL’s first social spot won the Young Director Award in Cannes. Her short film Ausreichend won the First Steps Award in Germany. Since then, she has directed numerous ads and social spots with her production company the beauty aside, one of which, Armut Kennt Viele Geschichten, won the 2010 Young Directors Award in Cannes. Different Kinds of Rain is her first feature film, with which she won the Best First Feature award at Tallinn Black Nights Film Festival.

The film is inspired by the Japanese phenomenon Hikikomori, which is increasingly spreading in Europe. Teenagers alienate from society and lock themselves in their rooms for weeks, months, even years. In a quest for self-discovery they escape weariness, fear of adult life and of failing expectations.
The story is conveyed from the point of view of the family members who are excluded and trying desperately to understand why he is doing this. The boy only communicates by pushing out pieces of paper with rain descriptions under the door. The rain stands for the life that he observes only from a distance.
We all know the urge to escape responsibilities. But if a whole family pursues it, what will hold them together?

BIBIANA BEGLAU has been the recipient of many awards, including the Berlinale Silver Bear for best actress. In addition to theatrical engagements at German-speaking theatres, she has performed in many film and television productions including The Murderer and His Child, The Ninth Day, 3 Degrees Colder and Under the Ice.

EMMA BADING is one of the most promising young German actresses nowadays, having acted in films such as Berlin Syndrom, Everyday Objects and Die Kleinen und die Bösen. 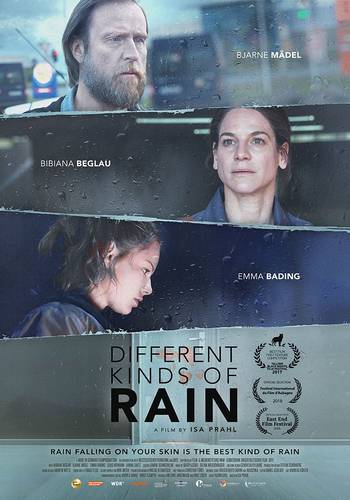