TADAS (30) is a yuppie. Yet with a wife, good job, a nice flat in a modern block and a new sedan, his life is completely joyless. He has no friends, does not care much for his career anymore and his wife is having an affair. Tadas is too weak to change anything and is stuck in a groove.

One ordinary workday, by chance, Tadas meets his former classmate. LINAS seems to be a self-confident womanizer, an “expert” of some indeterminate field, a free-living soul doing whatever he wants. Seeking to lighten up Tadas‘ dull life, Linas offers to take him “night driving”.

Nighttime. The guys drive in Tadas‘ car around the emptying city. They take only two litres of pertol in a gas station just to have a reason to stop again and make casual meetings with other night drivers. At first, Tadas finds it all somewhat weird and ridiculous, rather than romantic. The situation changes when they suddenly meet a stunning young woman. She is a dream-girl. She is a goddess of the night. She is a perfect traveller. She is VITA. At least Linas and Tadas seem to believe it. Step by step their flirt turns into acquaintanceship leading into a common journey in search of adventures. Unexpectedly, just as the three lonely wanderers seem to have been brought together by the night drive, Vita steals Tadas‘ car...

Tadas starts to blame Linas for it, but Linas still believes that stealing was just a part of the game, and their different interpretations bring them to the brink of a fight. Nagged by doubts they go to the police ofice when suddenly Vita calls them... Tadas and Linas are completely lost, but now they have only one option – to find their fellow traveller, their car, as well as the answers about their feelings and the night’s adventures.

LOW LIGHTS is a story about urban people lost in rhythm of their living. Their desire to escape day-to-day life and the hope of tasting something new impels them to create a different world. For one night they transform the cold insular city into a colorful, exciting and unpredictable space. The heroes seek to plunge into unexperienced adventures, spontaneous acquaintances, acts, revelations, to find love, to find hope. But... the night is so short.

Ignas Miškinis was born in 1978 in Vilnius. He had already directed several short films before his first feature DIRINGAS (2007), that gained success in the box office and press. Ignas Miškinis has experience of working as a director of TV shows for the Lithuanian TV channel “LNK”, as a sound director of several films and TV serials, as a director of advertising for such advertisement agencies as “RGB” (Film and Video Production House) and “McCan Ericsson Lietuva”. LOW LIGHTS is his second feature film.

The main engine of nowadays life is the lack of time. Everything is developing and changing at a maximum speed and we must keep up and overtake, too. You have to be successful, look nice and be happy in order to live up to the standards of society. But sometimes this aimless speeding makes you feel as if your life is just passing by and you just go with the flow. You are lonely, lost and become a stranger to the people, who are surrounding you, even to the closest one. Then the moment comes when you try to find ways how to escape this vanity, have some rest of day-to-day life or even forget everything around you. The hope to touch something new and inexperienced pushes you into strange, naive or sometimes dangerous deeds.

The story of LOW LIGHTS takes place in one short summer night – and this impermanence of time impels my characters to feel and outlive the beauty of the moment. They drive the same streets they drive by day, but this time the streets are different: There are no traffic jams, no more rush, there is just an open and wide space. They are free to discover new experiences, to find a new way how to get close, to be frank, to find hope, to love. They are not alone, not alien anymore. During their one-night car journey they create their own world, its rules and rituals, adventures and romance. But the night is so short…

Thus LOW LIGHTS occupies with such problems as alienation and vanity of modern society. My characters stand for those many people, who are imprisoned in the routine dictated by today‘s urban life. Nevertheless, the film’s messages are wrapped into a light and romantic mood. It reveals the beauty of the night and its colors and the chances that lie in a small breakout.

The journey is just a blink, it ends when the morning comes. But during this beautiful moment a banal labyrinth of city streets acquires the parameters of something inexperienced and new but at the same time very human and near. At least for one short summer night. 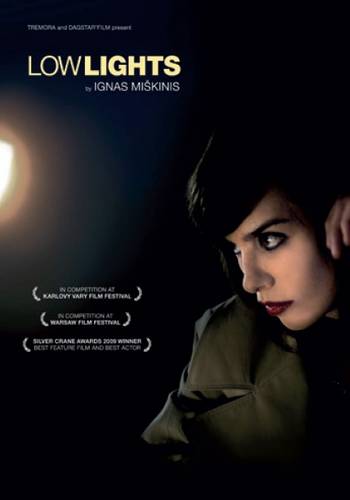