When two inept young criminals break into the home of a washed-up psychic in search of his hidden loot, they get a lot more than they bargained for… because ‘The All-Seeing Stupendo' is a genuine master of the dark mystic arts – at least that’s what it says on his poster and he’s sticking to it.

Black comedy is as British as tea and scones, cricket and moaning about the weather. It’s part of our DNA and the darker the better. Growing up in the U.K. in the 70’s & 80’s I’ve always been aware of the pathos and tragedy that underpin the great British comedies – from the jolly crucifixions of THE LIFE OF BRIAN, to the sardonic quips of the doomed soldiers in BLACKADDER GOES FORTH, British film and TV has always confronted the darker side of our existence with a well-honed, humorous insult.

I wrote SIDESHOW aiming to be a part of that rich tradition. It’s a film that presents the lives of flawed and broken characters, then drags them through the dirt to the edge of despair, for our pleasure and amusement; at the same time revealing within them a sliver of humanity which we can hopefully all relate to. With its contained cast of colourful characters and mixture of dark wit and high-stakes drama, I was very influenced by the similar rich vein of twisted offbeat British humour found in THE LADYKILLERS, SIGHTSEERS, DEATH AT A FUNERAL and WITHNAIL & I

Les Dennis One of the UK’s most recognisable and popular entertainers. Les has focused his recent career on acting, building up an impressive list of leading stage credits on tour and in the West End, in shows such as CHICAGO, ART and SPAMALOT as well as an award-winning turn in his darkly comedic oneman play JIGSY at the Edinburgh Fringe, which earned him a stack of four and five star reviews from the national press. His feature film work includes
INTIMATE RELATIONS, starring alongside Julie Walters and Rupert Graves.

Anthony Head is well known for his high profile roles as in the award winner TED LASSO, and as Rupert Giles in BUFFY THE VAMPIRE SLAYER, Uther Pendragon in MERLIN, the Prime Minister in LITTLE BRITAIN and as Herc Shipwright in BBC Radio 4's CABIN PRESSURE. His other film credits include THE INBETWEENERS MOVIE, PERCY JACKSON, THE IRON LADY, UNDERDOGS, A STREET CAT NAMED BOB, DESPITE THE FALLING SNOW and GHOST RIDER: SPIRIT OF VENGEANCE.

April Pearson is best known for her performance as Michelle Richardson in the British drama SKINS. April appeared in the first two series of the successful E4 show. Her film debut was in TORMENTED in which she plays a sadistic schoolgirl and since then she has developed an increasingly accomplished career in feature films including AGE OF KILL, TANK 432, HOME FOR CHRISTMAS, DARK BEACON, CAUGHT, TUCKED and FRACTURED.

Nathan Clarke has a growing reputation as a great young comic actor. His credits include PLEBS, THE 4 O’CLOCK CLUB, THOMAS THE TANK ENGINE, HARRY POTTER AND THE HALF-BLOOD PRINCE and WE STILL KILL THE OLD WAY. 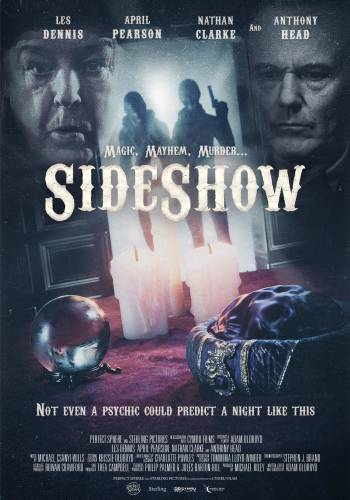