Mirubin, the enigmatic masked, stands up against the inefficient justice. He dares to put up against the government, punishing pedophiles. It is a personal war. Does it make Mirubin a criminal?
The journalist Amira is determined to uncover the truth behind the mask. The search leads her to doubt whether she is on the right side or not.

Martín Tuta (*1978) was born in Colombia, He interrupted his film studies to continue them in Chile, where he is currently based. He worked in over 70 TV series. He performed in several areas, from casting to direction, working as Head of Production and Assistant Director, as also script. TALION is his first feature.

"Sexual abuse will never end. These cases, instead of decreasing, are increasing. No government or social group will ever be able to stop them. When I found out that the raise of penalties for these offenders would not be the solution. I decided to make this film to question how should we deal with this threat. TALION is not a call for justice on own hands, it is a call to ask ourselves: what would we do if we were in this situation?" 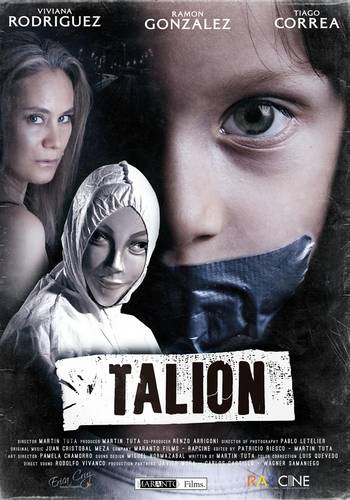