Dave is young and rebellious. A self-proclaimed King, influenced but not unconscious. As he sets out to find the stranger who danced with his girlfriend grabbing her, as if nothing had happened, he decides to take justice into his hands. Between violence, heartbreak and friendship betrayal, Dave will put his finger through the wringer and rush forward, unable to stop.
Will Dave, your neighbor, your friend, your son, your nephew, be able to reset the counter to zero?
King Dave is the story of Dave, told in a single breath in one sequence shot.

PODZ is known for directing successful TV series in Canada. In recent years he has been nominated seven times for Gemini Awards (given by the Academy of Canadian Cinema & Television) and won seven statuettes. In 2009, he directs the film adaptation for the novel Les 7 jours du talion by Patrick Senécal, and earns an official selection at the Sundance Film Festival. In 2010, he directs 10 1/2, winner of two Génie awards and two Jutra awards. L’affaire Dumont, based on the life of Michel Dumont, falsely accused of rape in November 1990 is his third film. Podz directs his 4th feature film, Miraculum, in 2014. King Dave is his 5th feature.

It is a film about a man looking back to his youth, when he did something really stupid. He bought into the whole myth of maleness. And all these feelings, this posturing machismo lead him down to a spiral of violence and errors. It is also a film of redemption. Dave tells us of his sins, using the viewer as a confessor. Someone he hopes will forgive and like him. The fi lm is constructed like a dream, a free-form stream of consciousness piece. The ultimate #selfie in one continuous take. This to better translate Dave’s descent. We all know a guy like a Dave, a nice guy who buys into the hype, tries to be a king. I hope it is moving and funny and dark and a little crazy. Well, maybe a lot crazy.

ALEXANDRE GOYETTE is a screenwriter and actor from Québec. His first play is the one man show, King Dave, which won him the Best Performance, and Best Original Text at the Gala des Masques in 2005 in addition to attracting the praise of critics and theatre community. On stage, Goyette plays in La grande machinerie du monde, Manhattan Medea. In films, he starred in Nitro by A. Desrochers, Seven Days by D. Grou, The Last Escape by Léa Pool, Fear of Water by G. Pelletier and Mommy by X. Dolan. He returned to writing with the director and writer Christian Laurence. Lindberg Express is the scenario resulting from this collaboration. He is also working with Podz on the adaptation of The Obese Christ, based on the novel by Larry Tremblay. 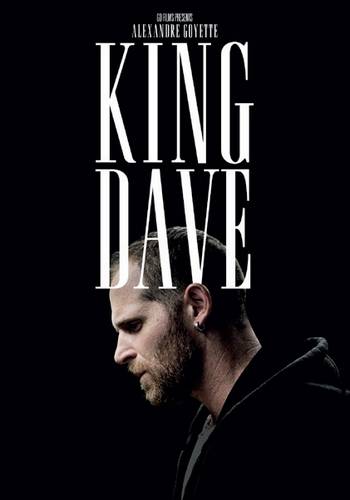