Eva tries to rebuild her life after her husband, Joaquin, abandons her for a sexy younger woman. When an accident leaves Joaquin needing constant care, Eva takes him into her home and debates whether to punish or forgive him for his past cruelty.

Born in México City in 1961. From 1979 to 1983 studies a Bachelors degree in communications at Universidad Autonoma Metropolitana and works for TELEVISA as production assistant, editor, Cinematorapher, in several projects and is part of a writers workshop coordinated by German Dehesa.

In 1985 he is accepted in CCC (Centro de Capacitación Cinematográfica) film school. Studies that he combines with his professional activity for TELEVISA.

In 1994 he makes his first documentary as director and producer “Soy René, soy seropositivo”. Since that work he has been active as director and producer of documentary films, where can be highlighted the spanish production for Discovery Networks Latin/America, “Virgen de Guadalupe Entre la fe y la razón”, which was nominated for the Latinos EMMY in 2002. It can also be mentioned that he collaborated for the CTW (Children’s Television Workshop) in the direction of small documentary pieces for “Plaza Sésamo” (Mexican version on “Sesame Street”) in its 5th season.

During 6 years 1998-2002 he worked in the historical and political documentary for the series “Mexico Siglo XX” and “México Nuevo Siglo” that was directed by Enrique Krauze. For this particular series he work as director, writer, cameraman, and editor for 16 projects. The biography of four Mexican presidents, Miguel Alemán, José Lopez Portillo, Gustavo Diaz Ordaz, and Ernesto Zedillo, and their work during their period, among others.

In 2002 he creates the production company Taller de Luz, Artesanos de la Imagen. In that year he develops the biographical documentary about Manuel Clouthier, the PAN contender for 1988 elections who died in 1989 in a strange car accident. With this work, called “Maquio Soldado de la democracia” he won the “Pantalla de Cristal” award in 2003 for the best biographical documentary.Writer and director of the feature films: El Efecto Tequila and Kada Kien su Karma. This last one released in México by Universal Pictures International.

Blanca Guerra was born in Mexico City in 1953. She debuted as an actress in 1973 in various Mexican soap operas. Guerra has also worked in some Hollywood movies such as Clear and Present Danger (1994).

José Alonso was born in Mexico City in 1947. His career as an actor began in 1965 when he was cast in the movie Tajimara. In the same year he landed his first leading role in Un grito en la obscuridad a Mexican tv series that ran for four years. Since then he had showed his acting skills in films and television. 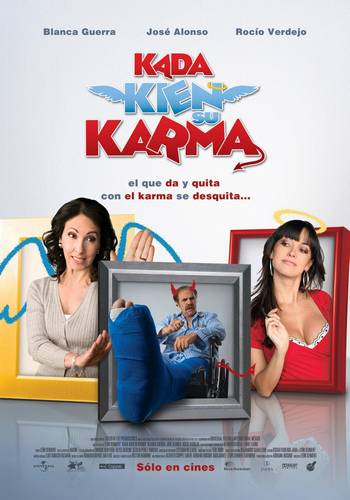