Mina’s family has introduced her to few potential husbands in Iran. She has rejected them all until she meets Kian, a surgeon who has travelled from Germany in search of a wife. It’s not love at first sight, but the seduction of life in Europe that makes her consent. In his mid-thirties Kian is desperate for a wife to make his life appear complete. He takes his new bride back home, but marriage to a virtual stranger is more difficult than they imagined.

Susan Gordanshekan, the daughter of two Iranian immigrants, graduated at the Television and Film Academy in Munich. Her short film Ice Flowers premiered at the Berlinale 2011. A Dysfunctional Cat is her feature debut and was developed under a “Cinéfondation Résidence” scholarship from the Festival de Cannes.

It is the story of a traditional Iranian arranged marriage but placed in a Western context to highlight the similarities rather than the differences of the challenges people face. It is about getting rid of ideals in order to find happiness. Just like the ideal image of love, the protagonist Mina must also let go of her ideal image of the West. Letting go of this ideal opens up the opportunity to engage with another person with all their weaknesses and peculiarities.

These thoughts are the foundation of the film for me. Nevertheless, I did not want to make a film that worked out a thesis but rather a "reverse love story", contrary to the established cinematic narrative.

PEGAH FERYDONI has achieved professional recognition both domestically and abroad, with high profile roles in TV series like Tatort, Kommissarin Lukas and Turkish for Beginners as well as films such as Shirin Neshat’s Women Without Men.

HADI KHANJANPOUR decided to become an actor at the age of 27, when he started his studies in acting in Ludwigsburg. After graduating, he has become an award-winning theatre director. A Dysfunctional Cat is his feature acting debut. 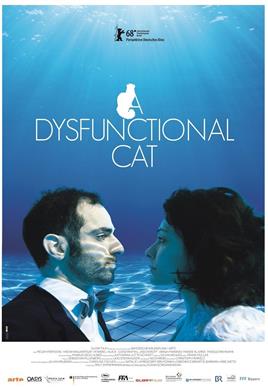