Vitaleme, Pierre and Mikenson are twelve years old and live in a home in Port-au-Prince. They are friends and do everything together. Vitaleme is haunted by his memories as a child servant and obsessed by the idea of freedom. He tries to convince his two friends to leave the home and live as they will.

When the town is struck by an earthquake, all three of them find themselves on the street. They try to find somewhere to live, and in various ways get by on petty crime. They play football to fill up their free time. Little by little they build a new life for themselves. Now that he is free, Vitaleme is no longer haunted by his past, until he finds himself separated form his two friends by an accident.

Jonas d’Adesky was born in December 1983 in Brussels. As a kid, he travelled 1 ½ year in Mali with his parents. As a teen-ager, he studied at Lycée Jacqmain in Brussels where he realized, in 2001, his first short film “Hors Monde”, presented at the 21st Festival “Caméras aux Jeunes” in Brussels. In 2002, he started studies of Sociology at the Brussels University (ULB), combined with an education in cinematographic writing and analysis (Elicit). At the same time, he was also making different short films. After his successful studies of Sociology, he started in 2006 studies of film director at Institut des Arts et Diffusion (IAD) at the University of Louvain-La-Neuve. Great traveler, he also made documentary films in (Eastern) Europe and China. Getting his university degree of film director in 2010, Jonas’s movie graduation “Nuit blanche” is selected for many festivals. In September 2010, Jonas is travelling to Port-au-Prince (Haiti) as volunteer to realize a documentary film for a NGO welcoming street children. He has there the opportunity to meet the children who will be the actors of “Twa Timoun”, his first long film. The film was written in Port-au-Prince but the frame was already developed by Jonas before to leave. In 2011, Jonas had the great honor to be laureate of the Fondation Belge de la Vocation as film maker. Today, he is busy on the shooting of a documentary film and is writing 2 long film scenarios. 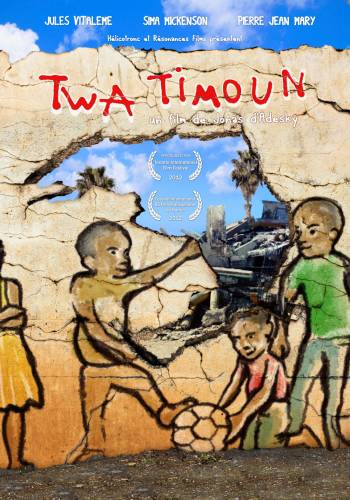