Javier, a shy Spanish doctor in a business trip, meets Angie, a beautiful Colombian dancer and owner of a Salsa school. Returning to Madrid, Javier does not feel right with his life and encouraged by his best friend comes back to Colombia to settle there for a while. Angie is working with her talented young dancers to make an audition to be part of DELIRIO: the most famous salsa show in the world. Javier and Angie will meet again, and live an impossible romance between two cultures, full of obstacles and misunderstandings, immersed in the world of salsa dancers in the town where dancing is the goal, the dream and life.

Chus Gutiérrez was born in Granada. She moved to New York where she attended various cinema workshops and made several short films. Her first feature, SUBLET, was nominated to the Goya Awards for the “Best New Director”. Among her films, ¡HAY MOTIVO! was in competition for the “Best Documentary” and RETURN TO HANSALA for the “Best Original Screenplay” also at the Goya Awards.

"In Cali everybody knows how to dance. That is the first thing that foreigners notice when they arrive. Young ones, children, elderly and even a blind can do it. Salsa is the sound of the city and the internal rhythm of its people. Apparently all human beings are the same but their behavioural codes differ, presenting slight nuances that give birth to other ways of understanding emotions and the meaning of life.”

Carolina Ramirez is one of the most beloved and famous actresses from Colombia. Some of her most remarkable performances were in television series and soap operas, which made her well known all over Latin America. Carolina is also a professional dancer. For CIUDAD DELIRIO, she trained with the salsa world champion dancer: Viviana Vargas.

Julián Villagrán has a long trajectory in theatre, cinema and television. He won the Goya Award in 2012 for the movie UNIT 7. His most recognized performances where in ELSA & FRED, EXTRATERRESTRIAL and DARK BLUE ALMOST BLACK, awarded in Venice, Goya, Stockholm and many other festivals.

Jorge Herrera worked in several theatre plays, films and TV series. One of the most renowned shows was I AM BETTY, THE UGLY GIRL. He is in more than 14 movies including MARÍA CANO, THE ART OF LOSING and ALL YOUR DEAD ONES. 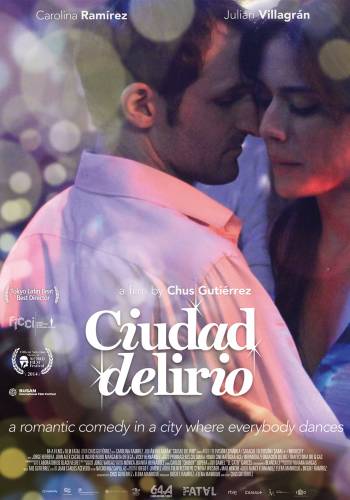