Devastated by her recent break up, Virginia Casta attempts to jump from a balcony. But, far from ending her life, she becomes an infamous social media personality. Between rock music, tears and frenzy with a scruffy musician, two dysfunctional friends and a pothead grandmother, Virginia discovers the meaning of friendship and a way out from this mess. Until her ex shows up again.

CLAUDIO CATAÑO is a professional actor who had his debut as a film director in 2016 with Moria. The film was nominated for 5 Macondo Awards, including Best Lead Actor and Actress and Best Supporting Actor and Actress. Virginia Casta is his second film.

This romance feature was shot with a dark sense of humour because that is the way I perceive the point of view of women. I believe women can find drama in every situation but then have the power to laugh about it in the end. This film is a collage of images, as I see Virginia as a woman about to explode at any given moment. Virginia pays respect to cinema and to life and love but, above all, to the heart of women.

JULIANA BETANCOURTH is a young Colombian actress who studied in Spain and appeared in TV Series like La Reina del Sur and Tres Milagros. Virginia Casta is her first film as protagonist.

CRISTINA UMAÑA, a Colombian actress known for her role as Judy on Netflix’s Narcos next to Pedro Pascal. Her roles in popular TV shows such as El Capo and Cumbia Ninja gave her widespread recognition in South and Central America.

JOSÉ ANGEL BICHIR is a Mexican actor who was recently awarded with a Best Actor prize by the Mexican Film Commission. He is also the nephew of Oscar nominee Demian Bichir. 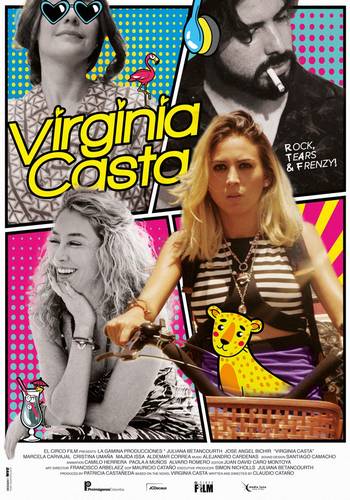