Teenage twins Kristen and Owen are misfits in the real world, bored of caring for their mum and fantasising about murdering her. Then along comes Liam: tough, charming, full velocity, genuinely cool. Kristen fancies him with the intensity of someone in a fairytale. But Liam takes Owen out drinking – and the depth of Liam’s mis-wired obsessions soon emerge. Liam offers unconditional love to Owen…on one condition: not to be dressed like a man!

Bryn Higgins grew up in west London. After the Royal College of Art he went to the BBC making documentaries. He left to write commissioned dramas and has always remained as film-maker who is passionate about making highly creative projects with a small group. Bryn has been BAFTA-Nominated for Originality and has made high-profile dramas and docs with British, North American and European broadcasters. His latest series for BBC ONE was twice nominated for an RTS (NW) Award for Best Drama Series and was selected for a BAFTA by the BBC. UNCONDITIONAL is his first feature film.

I grew up on a dull London street near the river. Secrets behind blank front doors. I’m drawn to stories about ordinary people with raging inner lives and about how our search for love can get us into trouble. Joe’s wonderful script rings so true. It’s my ideal to make a film where all the decisions about shooting are dictated by the emotions of the characters. UNCONDITIONAL got close. As the twins and Liam take us for a ride on the wild side, I tried to bring the energy of my favourite punk love songs. I wanted to make the film as raw and stirring as possible but also highly cinematic and with a lot of humour in the tension.

Madeleine Clark lives in the seaside steel town of Redcar where she grew up and visited the Musical Theatre Stockton Riverside College. Madeleine also writes songs and has recorded her first album. Like Harry, she gives a sensational breakout performance in UNCONDITIONAL.

Christian Cooke is one of Britain’s most successful and promising young screen actors. He grew up in Leeds, dropped out of school and got into trouble in his late teens before getting into acting and writing. In 2010 Christian had the lead in the BAFTA-Nominated series THE PROMISE. Christian is starring with Danny Huston and Jeffrey Dean Morgan in MAGIC CITY, a 13-part US series by Mitch Glazer (SCROOGED, LOST IN TRANSLATION). 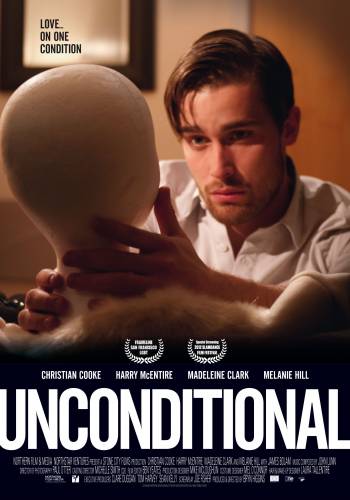