Rosa arrives in Tokyo to learn the art of filleting fish from the famous Master Kon, Japan's best fish chef. Because of her difficulty to communicate, Rosa gets more and more lonely behind the heaps of glistening fish on the working table – waiting to be cleaned. Broke and desperate, Rosa starts to work in a night club, entertaining Japanese business men. But maybe there is still a chance to learn from Master Kon.

THREES ANNA studied at the Rietveld Academy of Arts in Amsterdam. In September 2007 her debut film The Bird Can’t Fly (Golden Calf Award for Best Director) premiered at the San Sebastian International Film Festival. Anna’s work is connected by her great amount of research, as her stories always play in different countries in extreme and unfamiliar situations. She also writes columns, short stories and articles for magazines and newspapers and she made several documentaries.

To me an extremely overpopulated metropolis, where this story happens, is like being in water. You can swim, but you can also drown. Silent City is a universal myth, a mythological initiation ritual, in which the main character has to descend into the underworld in order to grow. Like the Sumerian myth of Inanna. The main character, Rosa (24), an emotional and ambitious woman, has to fight a personal battle in a mostly hostile Japanese metropolis. Loneliness is an important issue in this film.

LAURENCE ROOTHOOFT is a Belgian actress known from her part in Silent City. She studied at the theatre academy in Maastricht, the Netherlands. 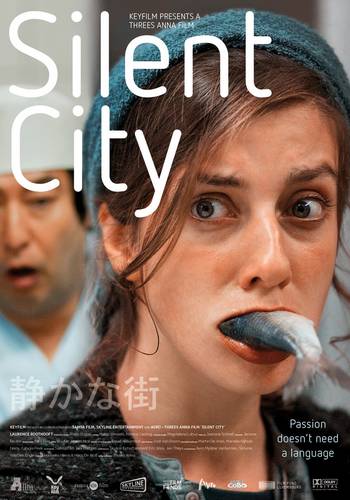