New York City. Over a decade, the director delves into the private world of four of the Big Apple’s most famous underground artists and trans activists: Amanda Lepore, Chloe Dzubilo, Sophia Lamar and T De Long. The result is an intimate portrait of these icons: little by little, their testimonies reveal fragments of a past – sometimes dramatic, always fascinating and simply extraordinary – that formed their identities and transformed their lives. Their words, fears and hopes take the audience from an outsider’s point of view to becoming emotionally invested in their destiny.

Gustavo Sánchez is a journalist and filmmaker who lives in Barcelona. At age 7, Sánchez began his path in journalism at a Radio, hosting his own radio program, which earned him the recognition of being the youngest radio host in Spain. Since then he has interviewed hundreds of people who work in music and film, and from the worlds of Spanish and international culture, for different media. I Hate New York (2018), is his directorial debut.

Amanda Lepore “I do what I want and that makes me a kind of feminist. What I do naturally is a statement.”
For the first time in history, the viewer is given access to the most intimate and unknown side of the celebrated model, actress, muse to David LaChapelle and icon of the New York night. The famous transgender diva of the New York scene is an authentic sculpture in movement. The missing link between the former New York and the current prominence of transgender divas

Chloe Dzubilo “At least in the US, nobody is talking about HIV or AIDS.”
I Hate New York reveals the previously untold story of the leader of legendary punk group Transisters and one of the most important activists for the defense of the trans community’s civil rights during the most critical years of the AIDS epidemic.

Sophia Lamar “I’ve never felt marginalized. How can someone marginalize me? Marginalize me from what?”
Actress, singer, model and true underground legend of the New York artistic avant-garde, she emigrated from Cuba during the explosion of punk in NYC and was one of the most famous of the Club Kids, exploring fashion, performance and video art. 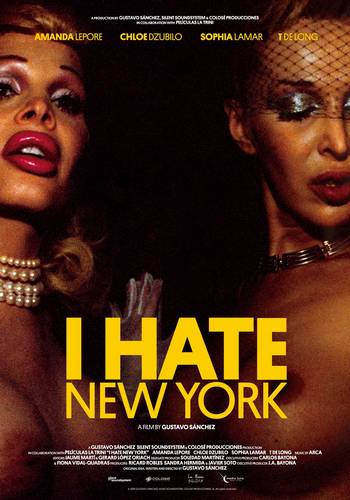