In an attempt to save the neck of his junkie son Joe, Eddie agrees to do a mysterious pick up with the help of Joe’s girlfriend Liz. The two head off across mid Ulster and eventually find themselves in possession of a lamb. En-route they fumble their way through a series of comic, tragic and disturbing adventures; Liz, struggling with her own drug addiction, crippling sensitivity and desire to connect with her disabled son who lives with foster parents. Eddie, an overweight and depressed ex accountant does his best to assume the role of a drug trafficker but his constant cradling of the lamb and love of bird watching doesn’t do a lot for his tough guy image. In between moments of unexpected heroism and unlikely sightings of birds (vultures in Mid Ulster) Eddie’s dysfunctional humanity connects with Liz’s tortured past and a kind of healing begins.

John McIlduff, born in Belfast, is a writer, filmmaker and stage director. After studying at L’École de Theatre Jacques Lecoq, Paris, he made films about fighting cows, pear trees and irresponsible parents which have been screened at several festivals. McIlduff directed commercials for well known brands of washing powder and has been awarded the “Prix de Qualité” from the CNC, France. As a writer, he has worked on both opera and soap opera, most recently writing for a French television show and wrote Dumbworld’s opera POSTCARDS, which had its world premiere at the Belfast Festival 2010 and was nominated for “Best Opera” at the Irish Theatre Awards. Along with composer Brian Irvine, he has recently been awarded the “Artist’s Taking the Lead commission” for Northern Ireland as part of Cultural Olympiad celebrations for London 2012, for the project NEST. Behold the Lamb is his first feature film.

It was my aim to create a film that was quintessentially Northern Irish. Not in terms of conflict and politics but in terms of something more oblique and profound: the Northern Ireland that I remember from visits to my aunts and uncles in the countryside, the colours and textures of the landscapes, the darkness that cradles our humour and our stern hearts that yearn to open.
It’s a simple story about two people who find themselves out of their depth and struggle to hold on to some sort of self worth. The film, although bleak at moments is peppered with humour and for me finishes with a subtle hopefulness. 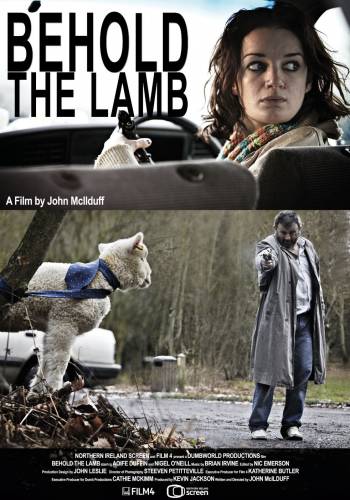