An airplane technical problem makes plane from Denmark heading to Greece lands at a Slovene airport. All passengers are being taken to a hotel in Ljubljana. Among then, Iben (25), a quiet young Danish girl. She meets Tina (25), who drives a shuttle as a summer job. Iben asks Tina to take her for a midnight drive around the town... They grow closer, at a different time in their life: one is hiding a big secret and the other is simply trying to find her place in the world.

Nejc was born in Novo mesto. His short fiction stories „Nothing Escapes the Squirrels” earned him several awards and all of his three subsequent novels were equaly successful. He finished his studies of film and TV directing at the Academy of Theather, Radio, Film and Television in Ljubljana. Also an awarded scriptwriter, his short movie script titled „It is easy“ won Grossman award 2009. His first feature film “A Trip” was selected at more than 30 festivals around the world, winning five national film awards and the award for best first feature at the Nashville film festival. “Dual” is his second feature.

“The atmosphere of “Dual” is at times surrealistic, impulsive, quiet or too loud, beautiful and so on. Quite similar to what happens between two human beings in love. Besides being a love story, Dual’s subtext is the distress of my generation of young Europeans being swallowed by the financial and economic chaos. Dual is a tiny glimpse at the uncertain journey of my generation.”

Mia Jexen
Mia received her Diploma in Acting from Clarendon College. Mia is one of the most prodigious Danish contemporary actressess and has an extraordinary talent for delivering the truth, complexity, contradictions, fragility and the vulnerability of the human condition. 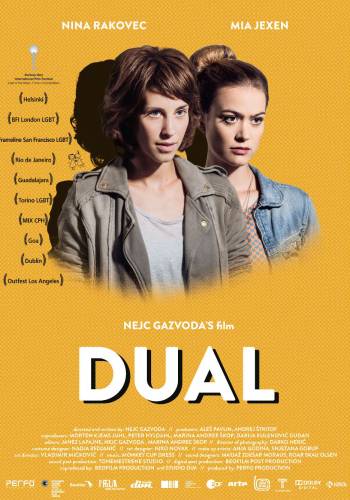