Marty is a bored temp at a mortgage office, out to get what he feels he deserves in life. He is a small-time con artist drifting from one scam to the next. When his latest ruse goes awry, mounting growing paranoia forces him to hide out in his co-worker's basement for a week. Marty’s anxiety is mixed with juvenile basement parties that eventually trigger him to flee to Detroit and spend his nights either at a derelict motel, or a place of luxury, depending on what’s in his pocket at the time. Marty’s misdirected paranoia reaches a nihilistic state. He is now quite literally a man willing to draw blood from those he sees as the bloodsuckers.

American director Joel Potrykus resides in Grand Rapids, MI USA where he attended a film school. BUZZARD (SXSW, 2014) is the final installment in his Animal Trilogy, following the 2010 Super 8 short COYOTE, and the 2012 feature film APE (winner of Best “Emerging Director” and Special Mention for Best First Feature, Locarno Film Festival). Along with production, Joel is a film critic for an annual publication.

“I want audiences not so much to root for the protagonist, but to question his behavior and motivations. They will know that the truth is being told, even if that truth doesn’t come from the mouth of the protagonist.”

Joshua Burge
Joshua briefly studied film in college, while writing and performing music as Chance Jones. After much exposure and accolades, and still calling Michigan home, he returned to film as an actor. His first major role was in 2012’s APE. 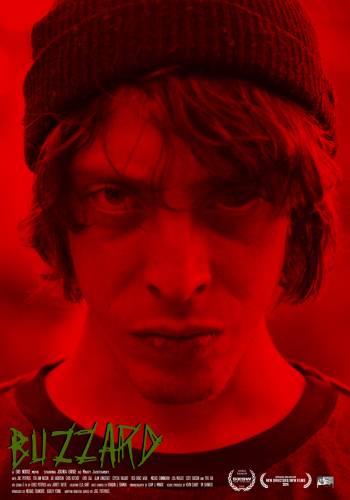