When the bored out evolutionary biology professor Maarten Moreau gets caught up in a robbery, he accidentally gets hold of the weapon. Seized by a renewed appetite for life, Maarten decides to keep the gun. A true romance blossoms between the boy and the gun, not without consequences.

Joost van Hezik (1982) has a background as a theatre director. Over the years, he repositioned himself in film, directing the absurdist drama series TreurTeeVee and short film The Funeral of The Shy. Boy Meets Gun marks his feature length film.

I think we all long for personal change, in one way or another. I know I do anyway. Eat better, exercise more, meditate, fulfill my dreams, focus more on my career, or less, just be a better person in general! And this belief in endless personal evolution seems to have risen to an unquestionable and almost holy status nowadays. With this film, I wanted to question this belief. Because what are we changing into? And is that really better? Maarten finds a gun, which acts as a magic wand that turns him into a stronger person. But is that good? Can the road towards becoming someone else, someone better, actually lead us to darker places?

Eelco Smits
Is a theatre, TV and film actor from Tilburg, Netherlands. He is known for his work on successful Dutch TV-series Bloedverwanten as well as is role in the 2010 film Majesty.

Victor Ijdens
Is a fresh new face on the Dutch film scene. He starred in the short film Radio Voorwaarts before moving on to his first feature film Boy Meets Gun.

Mara van Vlijmen
Is a Dutch actress best known for her role in the successful Dutch series of children’s films Mister Twister. She most recently starred in the TV mini-series GIPS. 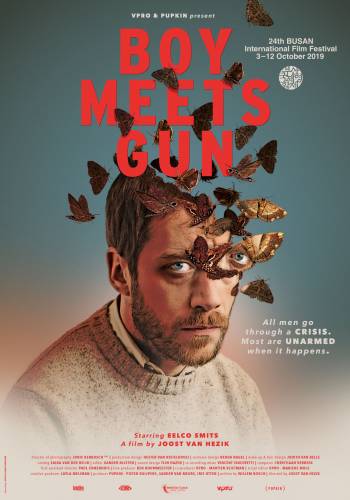