Martin seeks for a temporary job at Eugenio's house. When they recognize to be childhood friends, Eugenio offers him work for the summer. A power and desire game starts and their relationship grows beyond their friendship.

Marco Berger, born in Buenos Aires, gained international success with his first short film THE WATCH, which competed in Cannes and Sundance. His first feature PLAN B was well received by critics and became quickly a cult film in the queer niche. ABSENT premiered at Berlin Intl. Film Festival and won the prestigious “Teddy Award”. HAWAII is Berger’s third feature film.

I wanted to work with social boundaries framed in a love story, as classic tale of classes but from a contemporary perspective. I was wondering about the dynamics of the relationship between someone in a comfortable position in life and someone that is helpless, portraying the cruel game the society proposes and how both sides deal with it. I continued to work from a personal point of view by using two men as the lead characters.

Mateo Chiarino, born in Montevideo, studied acting and graduated from Metropolitana Dramatic Art School. He also studied film direction and works as a screenwriter. He plays in THESIS ON A HOMICIDE starring Argentinean actor Ricardo Darín. HAWAII is his first leading role in a feature film. 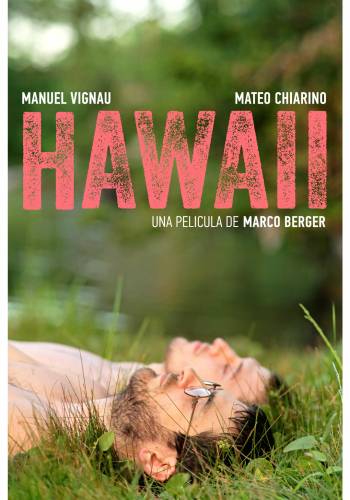