Stuck with a crazy boss, a jealous girlfriend, and a pushy father, Toby Simpson spends his life thinking of everyone else but himself. On his birthday things take a turn for a worse when his train home is cancelled and he finds himself on a coach full of young people going to the local music festival. At first it isn’t so bad as he finds himself sitting next to a friendly Czech girl, Renata. But then he is pickpocketed. Fuming, he heads into the festival with the girl, determined to find the thief, but ends up finding love and freedom instead.

After studying Arabic & Islamic Studies at university, PATRICK MAKIN joined Unilever Export. Unable to be “passionate about soap”, he headed to Yemen where he became a foreign correspondent in the country’s civil war. He then decided that he preferred fiction to fact and returned to the UK to be a writer. Happy Birthday, Toby Simpson is his directorial debut.

The original idea for the film came from my brother who commuted into the City for years, surrounded by people - like him - in suits. But once a year he found himself surrounded by people going to the Glastonbury Festival and wondered what it would be like to take his suit and briefcase and polished black shoes, and join them. This film is for all those people out there who are stuck in a rut and just need a little help to change. 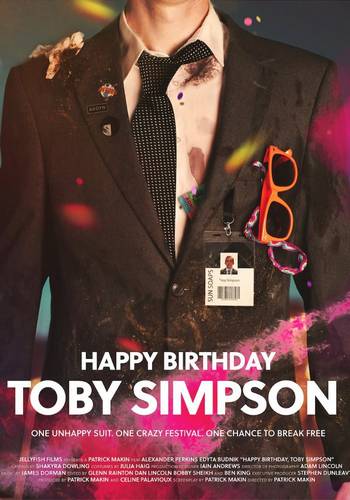