Georg Letterer is an introvert modeler, who builds detail-obsessed prototypes. He receives an order from a famous Hollywood Actress Dolores Moor to make a model of her extravagant Villa. This is the opportunity for Georg to escape from suburban dreariness and the perfidious psychological terror of his brother. He tirelessly works on the detailed model and simultaneously falls for the unattainable Dolores. One day Georg discovers an unusual power: he is able to influence the physical reality of the villa through the prototype he is building. With his own interests in mind, Georg becomes a calculating puppeteer who holds the threads of life of everyone around him, just to win Dolores for himself. The film is based on a 70-page Belgian comic book “Dolores” by François Schuiten & Benoit Peeters (Text) and Anne Baltus (Illustrations), published in 1991.

Michael Rösel (born 1971) studied directing at the Film Academy Baden-Württemberg in Ludwigsburg and focused his thesis on commercials. Since 2003 he works as a freelance director for advertising and image films on behalf of various agencies and clients such as Mercedes-Benz, Microsoft, DFB, Avira, McDonald's, Haribo, Chupa Chups, Trumpf etc. He also directed the first season of the highly successful series "Laible und Frisch" for the German SWR Television. “Dolores" is his first feature.

Since the very first reading of the original document the author Sebastian Feld and I, independently from each other, thought that this material would make a fantastic movie. The graphic novel reads like a storyboard which only needs to be turned into a film! At the center of the film there is an impossible love from the older Georg inconspicuous to the unattainable, younger, more attractive and successful actress Dolores. The distance between the two could not be greater. That charges the story with a dramatic tension: The seemingly impossible love story between Georg and Dolores, the substitutional satisfaction of Georg and Simone, the rivalry between Georg and Anton, the inner conflict of Georg familial obligation, the pursuit of self-fulfillment in his work, the development of Georg from the protagonists into an antagonists make “Dolores” to a unique blend of real drama with fantastic elements.

UDO SCHENK was born 1953 in East-Germany. His career as an actor started at the famous Maxim Gorki Theater, where was engaged from 1975 to 1985. He became known to a larger audience for being the German voice of Kevin Bacon, Ralph Fiennes, Gary Oldman, Ray Liotta and many more.
Since 2007 he is also a main-cast of the very successful German TV-Series “In aller Freundschaft”

FRANZISKA PETRI studied from 1992 to 1995, at the renowned Ernst Busch Academy of Dramatic Art in Berlin. Her cinema debut was a part in „Das Mambospiel“ (1998) by Michael Gwisdek, which opened the 48th Berlin International Film Festival. With her first leading role in in the award-winning “Vergiss Amerika“ (2000) she attracted both critics' and audiences' attention. For her outstanding performance in “Für Miriam” (2009) she was awarded Best Actress at the 59th Berlin International Film Festival. 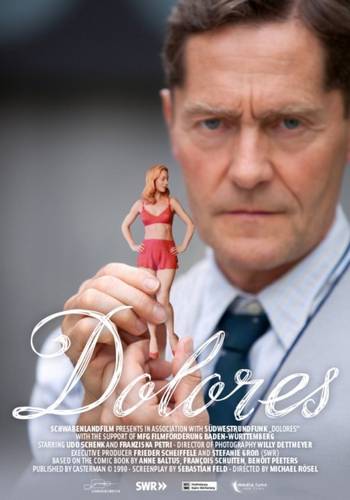