Fran White is sweet eighteen years old and a real firecracker. More than anything, Fran dreams of becoming a professional wrestler. Her single-father Whitey is a former-pro (known as White Lightning in the ring) with broken dreams of his own and is dead set against Fran wrestling. Fran is determined though and when Whitey’s old rival Dark Thunder comes to town, she runs away to join his tour. For her first time she meets her mother, a sexy ex-wrestler. Whitey is devastated and while he tries to get his daughter and his wife back, Fran wrestles for her dreams...

Beat Down is my first feature film and, in making it, I wanted to set down a marker for the types of films I aspire to create in the future. An irreverent comedy set in my native Newfoundland and Labrador (Canada), Beat Down is deeply rooted in working-class family life. This work has all the narrative elements that I feel drawn to the most and want to fully explore as a filmmaker. The story is set in the highly colourful and theatrical world of semi-professional wrestling. The plot revolves around a teenage girl who dreams of wrestling glory despite the objections of her overprotective father (a single dad). By using the wrestling ring as a metaphor, I was able to explore, in a heightened dramatic and stylistic way, the theme of the struggle to follow one’s dreams. The character’s gritty pasts serve as an emotional backdrop as the story unfolds. Of course, the lessons learned in the wrestling ring also apply to the wider world. The overarching lesson - that dreams are worth pursuing even at the risk of failure - is one that I hope to resonate with audiences in their own lives. My intention was to do this by creating a visually striking, emotionally engaging and wildly entertaining experience for the audience. Most importantly, I wanted to achieve a balance between the comedy (largely character-driven) on the one hand and the often heartbreaking emotion on the other. I didn’t want to make a dour film about blue-collar strife but neither did I want to create laughs at the expense of these characters and their struggles. Life, and this may be particularly true from a Newfoundland and Labrador perspective, is a mix of the tragic and the comic. It was my goal from the start to express this poignant ambiguity. I wanted to make people laugh but also to move them. This may be a fine line to walk but I feel strongly that it is worth the attempt. I hope I have done so with my debut picture.

Gemini-winning actor and writer Robb Wells hails from the East Coast of Canada. He is best known for his role as ‘Ricky’ in the award-winning hit TV series Trailer Park Boys. Robb co-wrote and starred in the series as well as the Trailer Park Boys feature ﬁlms and the live theatre shows. His numerous other credits include roles in the feature ﬁlms Virginia’s Run, A Hole In One, Say Goodnight To The Bad Guys, Boondock Saints 2, Hobo With A Shotgun, and Would You Rather. Robb also co-wrote and starred in two short ﬁlms: One Last Shot and Cart Boy. His other credits include hosting and co-writing the East Coast Music Awards in 2006 and 2007, and appearances in the music videos The Darkest One, and Small Town Dead. Most recently Robb wrote, produced, and starred in the television series The Drunk and On Drugs Happy Funtime Hour.

Since the age of ten, Marthe Bernard has been acting in numerous independent films and commercials in St. John’s. In 2008 she landed the role of Tinny on CBC’s Republic of Doyle, which is now entering its third season. Marthe has also embraced theatre work in her young career, spending two years at Theatre school on the west coast of Newfoundland and at summer theatre festivals around Newfoundland. In 2009 she played the role of Molly in Rabbittown Theatre’s acclaimed production of Sex, The Rules Of, which toured to the Halifax Fringe festival. She continues her acting training, most recently studying at workshops in Vancouver, BC and at RADA in London, England.

Ontario native Tony Nappo is a graduate of the American Academy of Dramatic Arts in New York. Tony’s 20 years of film and television credits include Mother’s Day, Saw 2, Four Brothers, Land of the Dead, This Beautiful City, You Might As Well Live, Murder at 1600, Hank and Mike, Defendor, Better Than Chocolate, Who is Cletis Tout, King, The Bridge, Breakout Kings, DaVincis’ Inquest, Intelligence, Bloodletting and Miraculous Cures, This is Wonderland, Slings and Arrows, The Republic of Doyle and many, many more. He has also worked regularly on Toronto stages. He will next be appearing in the Cosmonaut Sends a Message to The Woman He Once Loved in the Former Soviet Union at Canadian Stage. 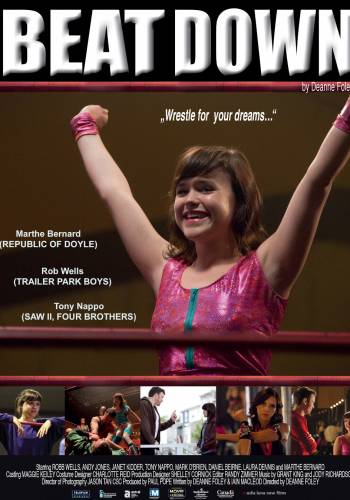